The ObsCos lab is contributing to the next generation camera being built with collaborators from Fermi National Accelerator Laboratory, Argonne National Laboratory, the University of Chicago, UC Berkeley, and many other institutions. The work being done at University of Illinois is focused on developing cryogenic optics and anti-reflective coatings for millimeter-wavelength astronomy.


The ObsCos group at Illinois is responsible for fabricating arrays of lenslets for SPT-3G. These lenses couple radiation from the sky to the detectors. In addition, an anti-reflective coating is applied to the arrays, and laser cut between lenslets to avoid stress due to thermal contraction when cooled to 300 mK.

(Left) Image of a 271-pixel detector wafer produced by Argonne for SPT-3G. (Center) The first completed lenslet array for SPT-3G. This was developed and fabricated at Illinois. The part is roughly 10 cm across. Ten of these hexagonal modules will make up the full SPT-3G array. (Right) The first two fully-assembled detector modules in the SPT-3G cryostat at Fermilab for commissioning.

(Left) Cross section of the 3-layer PTFE AR coating developed at Illinois for the SPT-3G lenslet arrays.(Center) Our custom-built die press (roughly 40 cm on a side) forms the AR coatings to conform to the 271-element lenslet array.(Right) A detail of a completed SPT-3G lenslet array. each lenslet is roughly 5 mm diameter and the gaps between lenslets have been laser machined to provide relief for thermal contraction.

In addition to the work being done for the SPT-3G third generation camera, the ObsCos lab is working on the larger problem of efficiently and accurately producing anti-reflective coatings in various substrates. This research spans disciplines and involves lasers, custom tools, high frequency simulation, software development, and careful metrology. 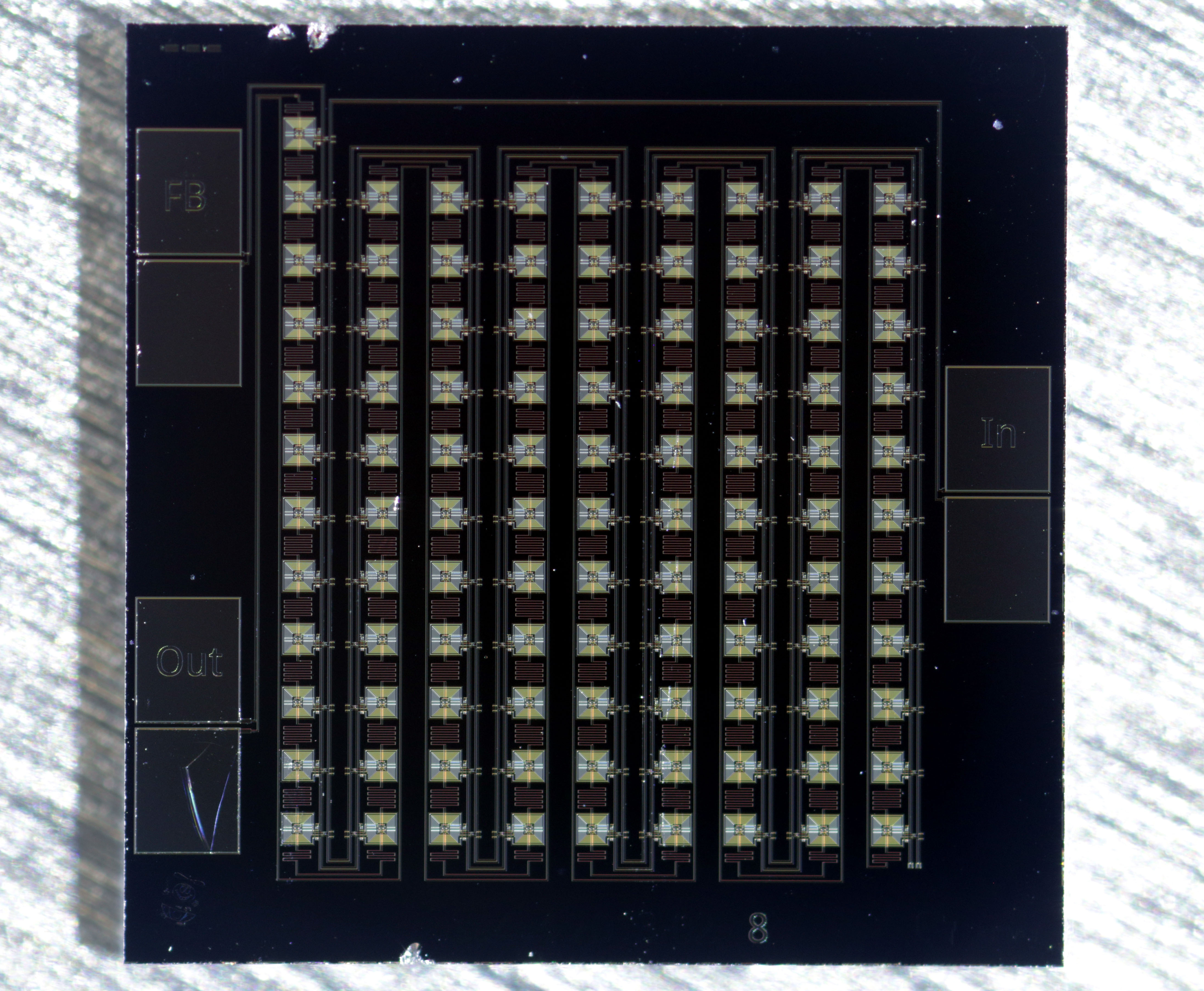 Closeup of a single
SQUID array

SPT-3G will have over 15,000 bolometers, a factor of 10 increase over its predecessor, SPT-POL. To read out such a large number of detectors, Superconducting Quantum Interference Devices, or SQUIDs, are used to read out multiple bolometers per SQUID. This technique is known as "multiplexing". SQUIDs themselves consist of at least two Josephson junctions (where an electrical insulator is sandwiched between two superconductors), arranged in a loop, which allows them to measure extremely small magnetic fields. 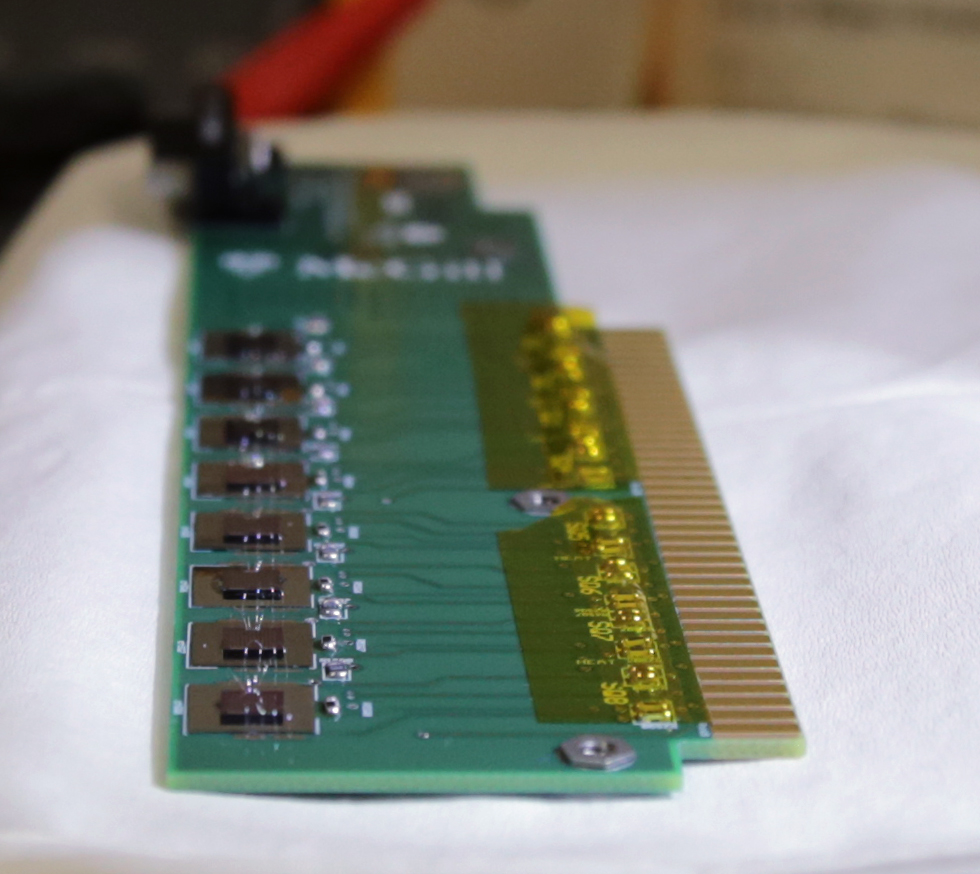 Professor Vieira's group is involved in producing printed circuit boards for SPT-3G, each containing 8 100-element SQUID arrays, as pictured. His group is responsible for attaching connectors and surface-mount components, affixing Niobium magnetic shielding, mounting and wire-bonding the SQUIDs themselves, and circuit testing for both the boards and the SQUIDs. Completed boards are then sent to Fermilab for integration into the receiver system (pictured below), and for testing the SQUIDs' superconducting properties at 4 Kelvin. 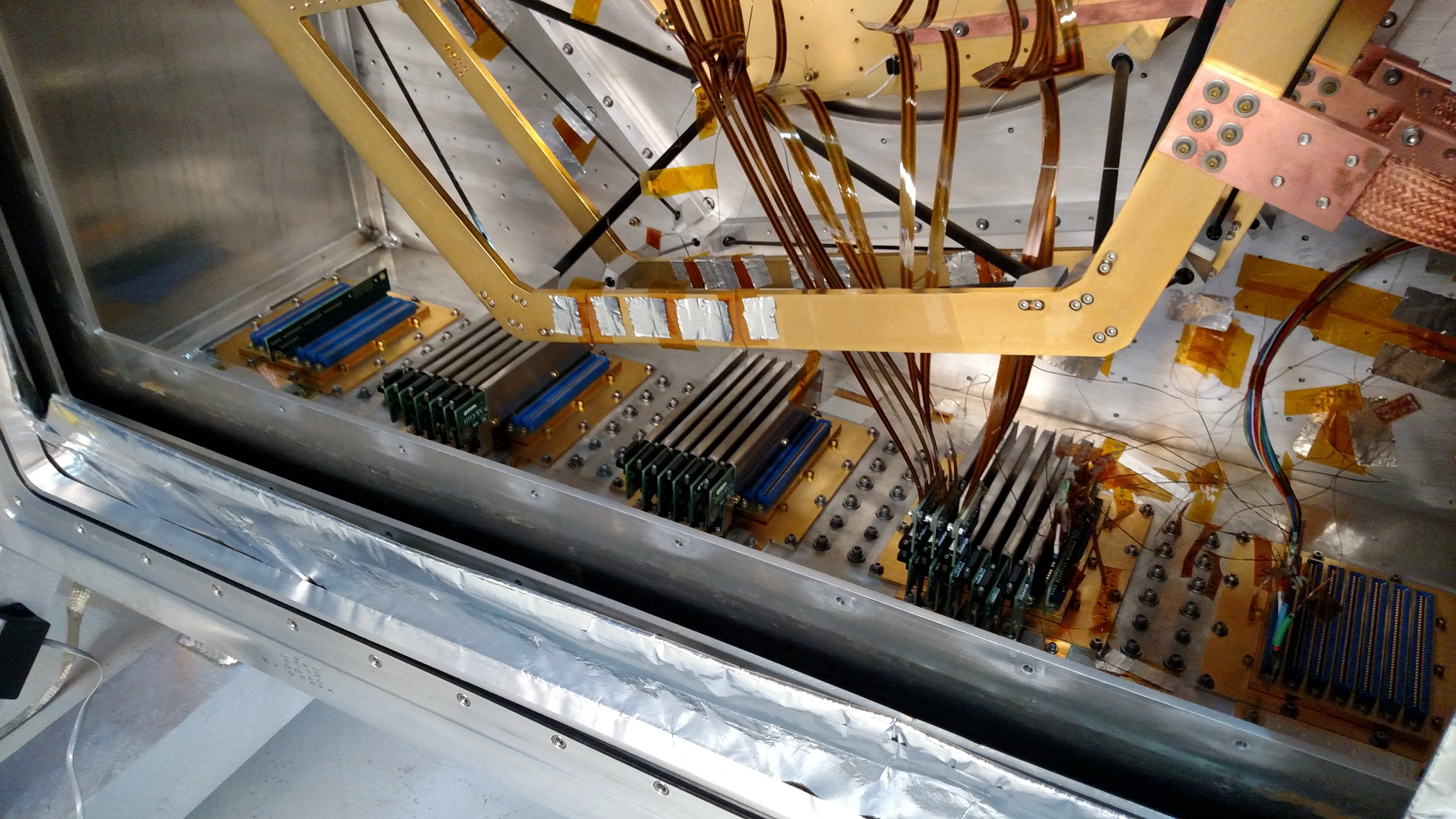