TIM (The Terahertz Intensity Mapper) is a wholly unprecedented experiment to study the cosmic star formation history. It will map a volume spanning 4.5 billion years of cosmic history (0.52<z<1.67), on scales from 1−50 Mpc (30” to ∼ 1◦ ) with complete spectroscopic information. In the coming decades this will be a powerful cosmological tool for charting the 3D structure of the universe. There is significant discovery potential with TIM,  since it will be probing an under-explored wavelength range with unprecedented sensitivity using a new astrophysical technique. TIM will be the first generation of experiments using intensity mapping in the FIR regime, and fills in a crucial wavelength regime only accessible from either space or a balloon platform. TIM fills a unique and vital scientific niche not filled by Herschel, SOFIA, ALMA, JWST, or even SPICA as currently conceived. 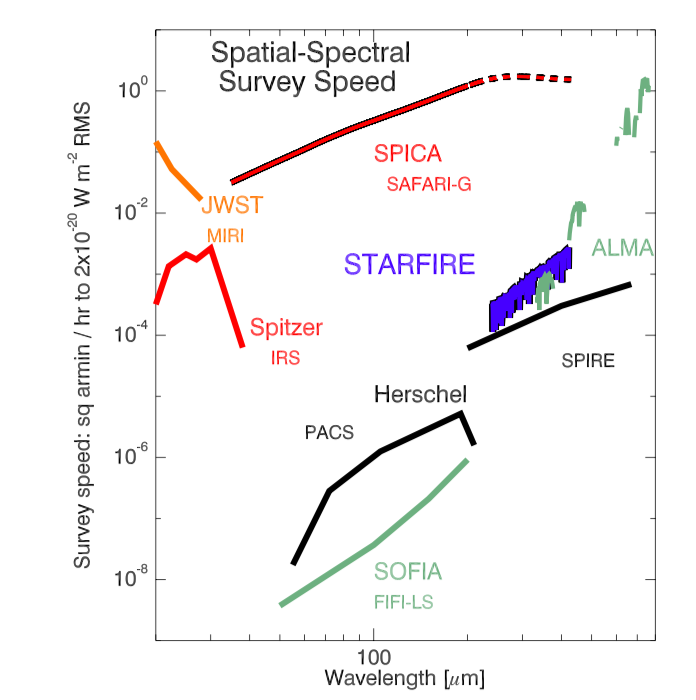 Explaining the history of cosmic star formation through the evolution of galaxies is one of the most important challenges in modern astrophysics. A wealth of data has been assembled in the last decade showing clearly that the total star formation rate density has fallen dramatically since its peak 7−10 Gyr ago (z∼1-3; Madau & Dickinson 2014, Fig. 2). The nature of the galaxies responsible for the bulk of star formation has also changed of cosmic time, with star formation previously dominated by luminous, dust-obscured, star-forming galaxies (DSFGs) that are almost absent in the local universe (Casey et al. 2014).

The path to understanding galaxy evolution will necessarily run through observations in the far- infrared (FIR). Half of the total energy output from the cosmic star formation has been absorbed by interstellar dust and re-emitted in the FIR (Hauser & Dwek 2001; Lagache et al. 2005). Moreover, there are a variety of un-extincted FIR diagnostic lines that can reveal the physics of galaxy evolution by tracing the star formation rate (SFR), black hole accretion rate, mass function of stars, spectrum of ionizing radiation, and metallicity of the interstellar medium (ISM).

TIM will be a vital technological, data analysis, and a scientific stepping stone to future orbital missions, and will also advance our understanding of galaxy evolution through observations that cannot be replicated with current FIR instruments. We will survey one 0.1 deg2 field centered on GOODS- S and one wider field (∼1 deg2) within the South Pole Telescope (SPT) Deep Field, both of which have rich multi-wavelength ancillary data.

TIM combines a long-slit spectrometer operating from 240−420 μm with a 2 m low-emissivity carbon-fiber telescope to provide a substantial increase in sensitivity over existing instruments. 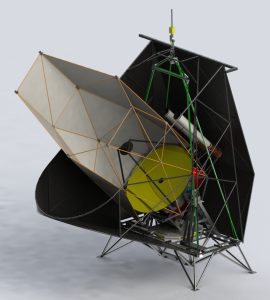 TIM telescope and gondola, showing the cryostat and star cameras.

The TIM telescope is a reflecting telescope with a segmented, 2.0-meter diameter, carbon fiber primary mirror, as well as a fully carbon fiber secondary and support structure, with gold metallization of the reflecting surfaces to minimize the emissivity. 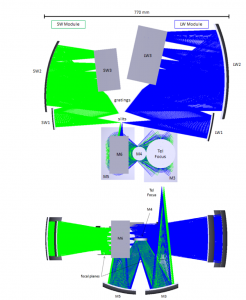 The two modules follow the same basic design; each consists of a plane diffraction grating mounted between concave collimating and camera mirrors in a Czerny- Turner configuration. 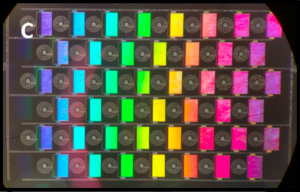 A microscope image of the 45-pixel prototype KID array

KIDs have emerged in the last decade as a straightforward approach to very large detector arrays for astrophysics. These devices use thin-film, high-Q micro-resonators that absorb incident radiation and respond by changing resonance frequency and line-width. Due to the high resonance quality factors Q ∼ 10^5  that can be obtained, large numbers of KIDs may be read out on a single RF/microwave circuit. Each circuit is simply a single RF line down to the focal plane and another line returning via the amplifier, and it carries the signals of ∼ 10^3 detectors.

KID technology is now rivaling the performance levels of the SQUID-multiplexed bolometer systems in ground-based instruments.